pictures (or it didn't happen) 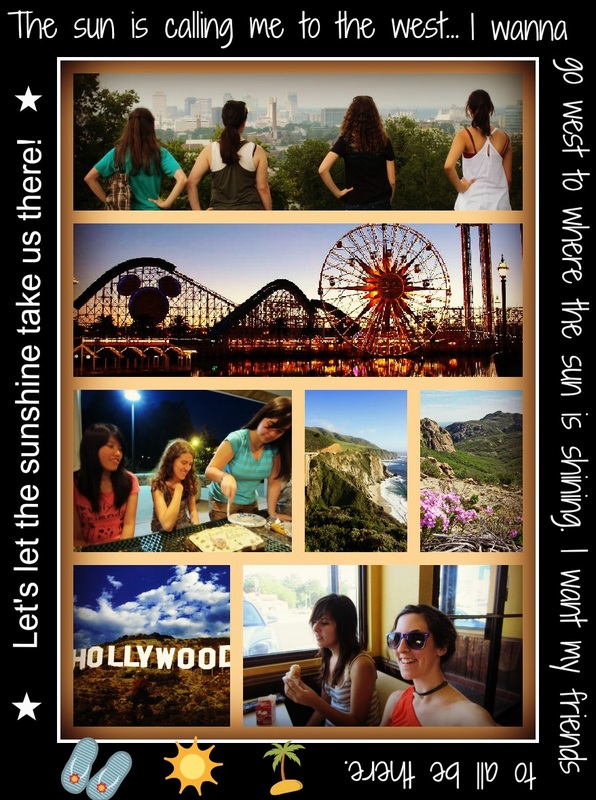 The lyrics are from Hawk Nelson's song, "California." I'm pretty excited for our road trip. Can ya tell? :)

Room of the Week: Our "flat" at Western

Room of the Week: My Room 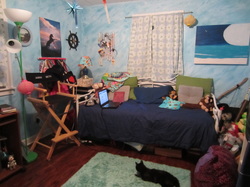 Looking back, I missed this feature, so here it is again. Not quite as exciting as Harlaxton's 100 rooms, but I love my room! Oh, and there's Roberta. :) 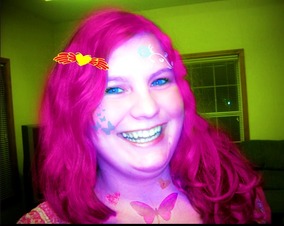 Shelby's the only one who has a hair clip! I also tried drawing in a peace-sign flower on her forehead... 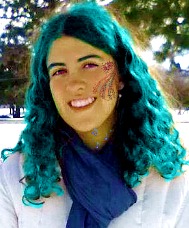 Amber is probably the one who most closely resembles a rainbow...It tried for yellow-ish dyed skin, pink eyes, and, of course, blue hair. Her tattoos are musical notes.

I had fun with Nayab's...I'm glad I could find a picture with her hair down--it's so pretty! 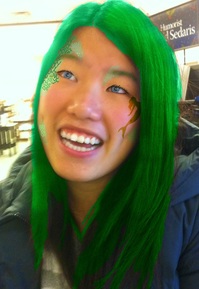 I tried going for a mermaid theme with Amy...in the random tinted spots on her face, you can see that scales have started appearing... 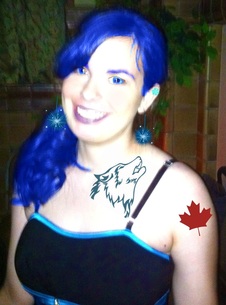 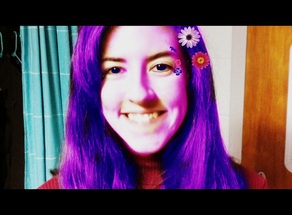 Here's a quick one of Anna Beth..I want to eventually do everyone whose read the books, but I have a 8am class tomorrow...
Can you see the unicorn climbing her eyebrow? Or the Pegasus by her right eye? 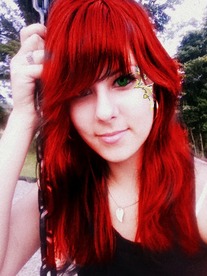 I was bored, so I continued with the Hunger Games theme and used picnik to edit a photo of myself with the changes I would do if I were from the capitol. It isn't as crazy as Sara's...I think because I chose not to dye my skin pink. I did add some face tattoos that you can't really see...

Sara is from the Capitol 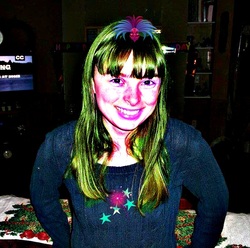 I posted this on Facebook, but it's really more applicable here. If you don't understand, read Sara's Question Tuesday blog.
...I'll be so sad when they shut down picnik.com

Room of the Week: The Gold Room 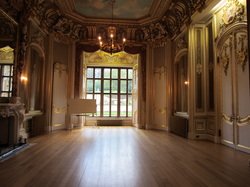 I almost didn't know what this room was when I looked back through my pictures. For one thing, I rarely go in there, and two, now there's a long table in the middle of it, which makes the atmosphere a lot different. There are classes and special events, like my writing professor's poetry reading, held in this room. And it has INFINITY MIRRORS!!!

Room of the Week: The Gym 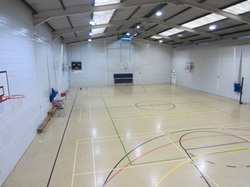 I went there once...briefly...to use the bathroom.

Room of the Week: The Library 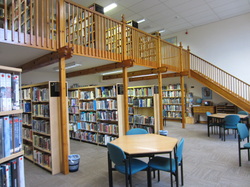 Not how I pictured a library in a Victorian manor, but it's a nice place. This room actually used to be the kitchen before this was a school.
"So, Watson, using the principles of deductive reasoning, how can we tell this was the kitchen?" Dr. Bujak (one of the British professors) asked me during our "field trip" tour of Harlaxton.
The answer: high ceilings, a place where a stove once was, and a large window to let air in.
Plus, this is usually the warmest part of the manor, so it's nice in cold weather.

Room of the Week: The Conservatory 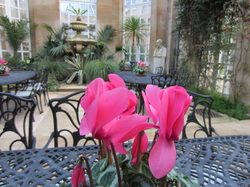 Since I didn't post one last week, here's an extra.
Yes, like the board of Clue, we do have a conservatory.

Room of the Week: The Schroeder Lounge 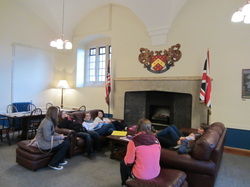 This is where cool kids hang out and procrastinate. Also home of "My Immortal" story time.

Room of the Week: This Nook 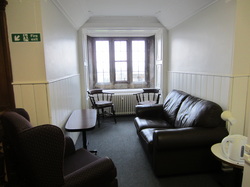 I was going to blog from this nook earlier, but then it was time to go watch TV. So that was that. I blogged from the floor of my room...not as cozy, but it'll do.

Room of the Week: The Secret Staircase 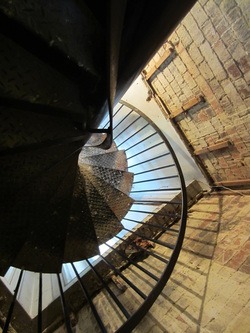 The Room of the Week this week isn't really a room at all. It's a secret passage leading from the basement music room to the long gallery, and on up to another room upstairs. I was very proud of myself for finding this one on the first day all by myself. It is, in my opinion, the best secret passage in the manor...unless there are more epic ones I haven't even found yet!
This staircase used to be used by servants in the manor, since servants were better unseen. Imagine having to carry a candle in one hand and a full chamber pot in the other hand, down all those stairs. Yikes!

Room of the Week: The Tower 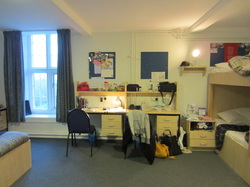 Look! It's my room! I sleep on the top bunk, and the desk on the left is mine, the one with the decorated board over it. On that board I have some pictures, a cute animal calendar, and a the first Blue Envelope letter I opened. There's another board over my bed; you can probably see the red towel hanging there, along with some more pictures. My room is a really nice size: big compared to a normal dorm room, but still cozy.
Below: my desk and the view from my window 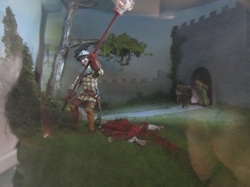 Your exclusive view of London includes:  a guy's head on a spear, Hitler, and a creeper photo of an elderly couple at Hampton Court Palace!

Yes, I did just choose the quirkiest photos I had. And yes, I did just take the Hitler picture because it reminded me of my friends. lol

Room of the Week: The Great Hall 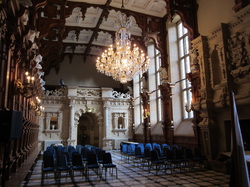 I’ve decided to do a weekly feature: Room of the Week. Each week I’ll post pictures of a different room in the manor. It has 100, so I’ll have more than enough to choose from. This week’s room is the Great Hall. It’s the first room we were ushered into upon arrival and it is absolutely magnificent!

P.S. You can click the picture for a larger view. 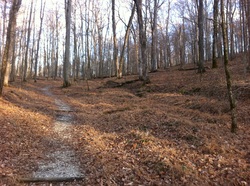 We walked a little more than 5 miles through the woods. The trail was beautiful! We also got to see several deer! 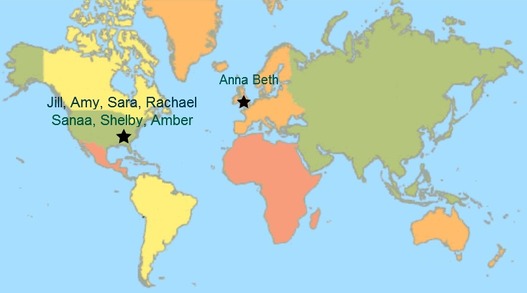 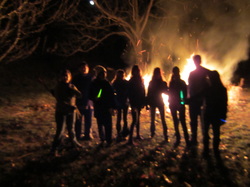 ...Because nothing says "Happy New Year" like a raging fire and some good friends.
Powered by